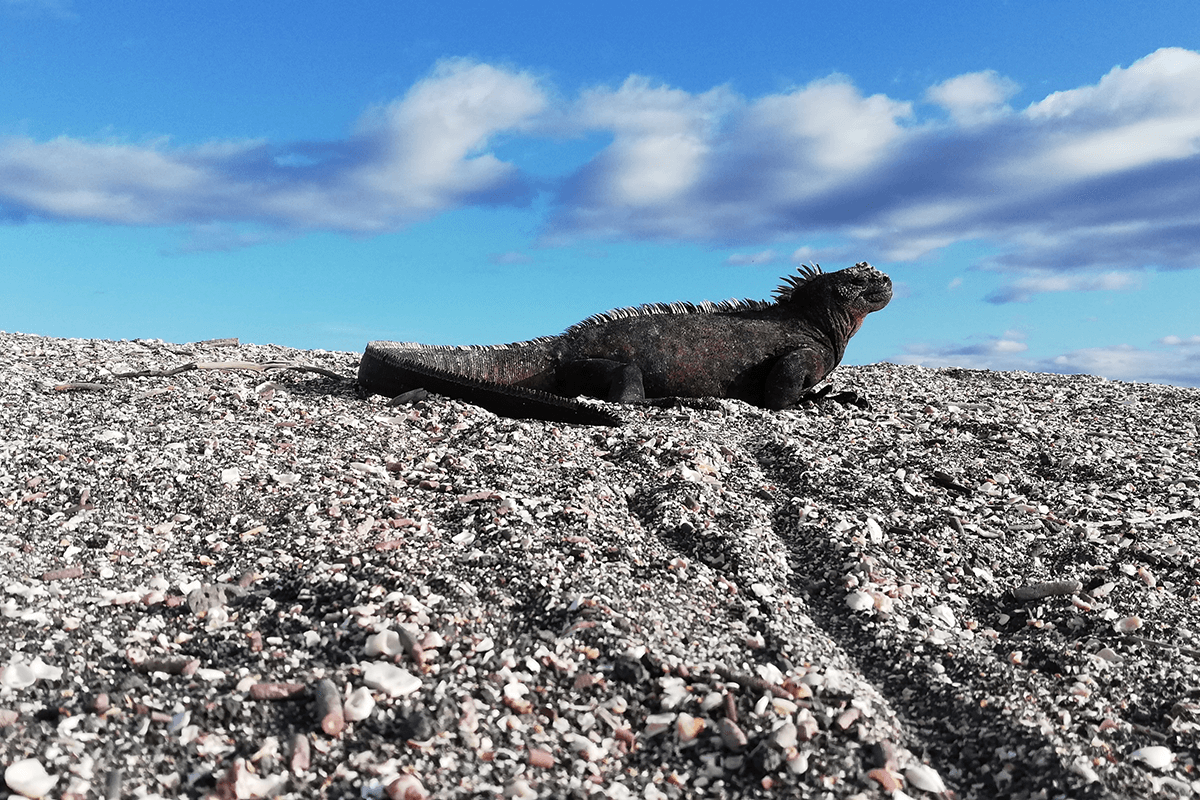 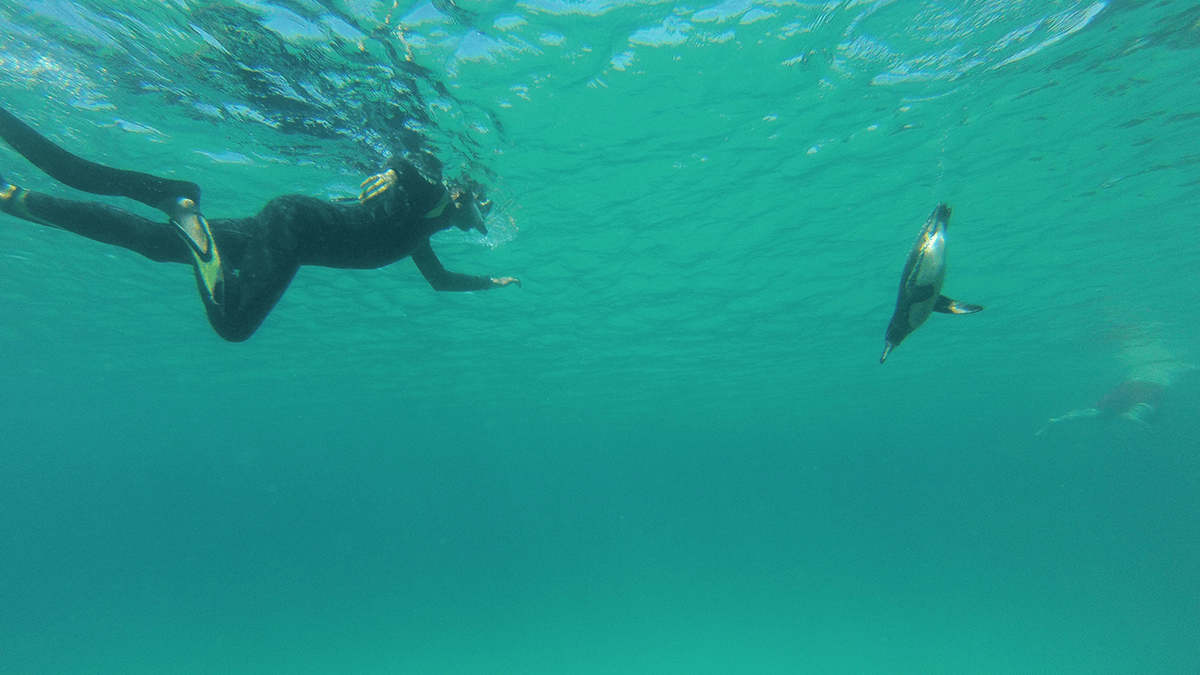 BALTRA ISLAND: Home to Galapagos’ main airport, this will be the starting point of your experience aboard the best tour of the Galapagos Islands. A bilingual guide will meet you at the airport and assist you during the transfer onboard the Golondrina. Welcome Ceremony, briefing session.

MOSQUERA: Wet landing. Situated between Northern Seymour and Baltra, its distinctive flat geography sets her apart from the rest of islands. A long strip of white sand, rocks and tide pools, Mosquera Islet is an excellent diving and snorkeling site where you can enjoy the local fauna without crowds of tourists to distract you.

ESPINOZA POINT (FERNANDINA): Dry landing. Hour and a half hike through sandy and/or rocky trail that’ll take you through iguana nesting grounds (nesting season January-June). During the hike you’ll be able to see lava flows, penguins, pelicans, lava cacti, and a colony of cormorants. Snorkeling on the beach before heading back onboard. 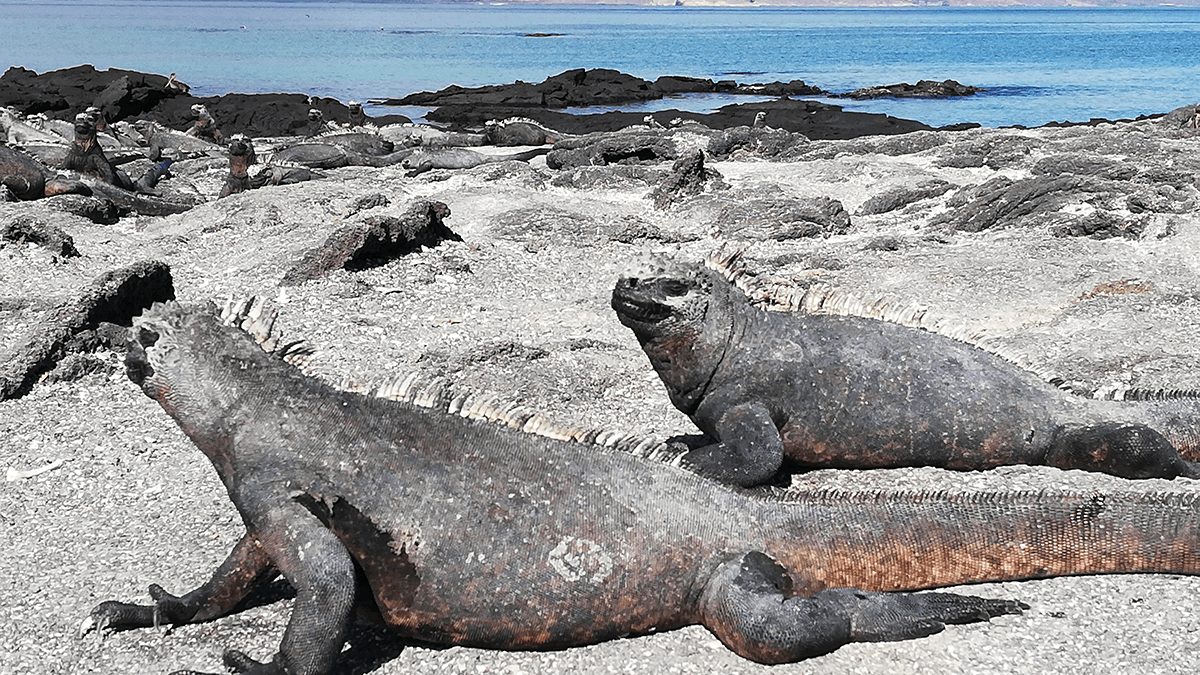 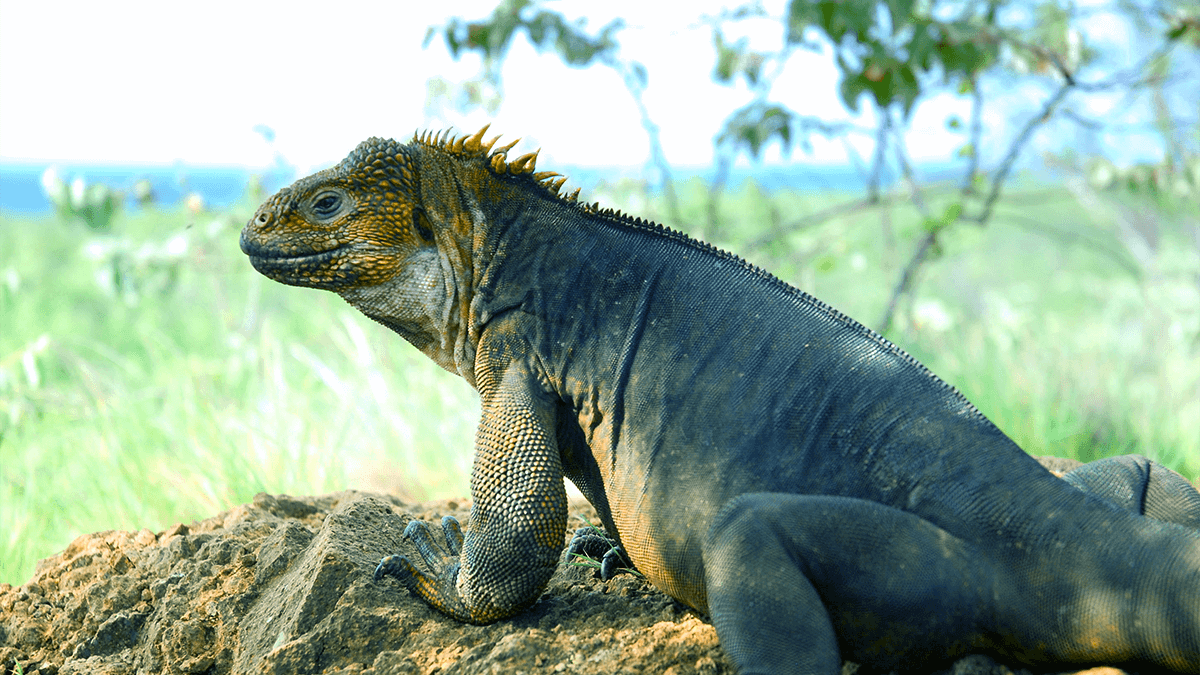 URBINA BAY (ISABELA):Wet landing on Urbina T. Kilometer-long, 2-hour-long hike through sandy and/or rocky trail were you can find coral reefs and seashells above water. You’ll also observe a large land iguana colony, Darwin finches, giant tortoises, (between June-September) and non-flying cormorants. Snorkeling on the beach before heading back onboard for lunch.

TAGUS COVE (ISABELA): Dry landing. During the 1800’s this place was a port where whalers would dock and write the names of their vessels on the walls of a cave. The visit begins on the shore, up a wooden ladder and onto a trail that’ll take you through a forest of Palo Santo trees and arrive at Darwin Lake, a salt water lake inside an extinct volcanic crater. We’ll hike around the lake, through the site’s characteristically dry vegetation, so we can get a panoramic view of the Darwin and Wolf Volcanoes (2-hour-hike, begins at sea-level and getting up to 50m above sea-level). After the hike, a dinghy (panga) ride along the shoreline will offer a chance to observe penguins, cormorants, bobbies, pelicans and sally crabs. Snorkeling on the beach before heading back onboard.

PORT EGAS: Wet landing on the dark sand beach of James Bay. 1½ hour hike on rocky terrain onto the Salt Crater were you can find Darwin finches, Galapagos hawks, marine iguanas, sally crabs, seals and sea lions. Snorkeling on the beach before heading back onboard.

CHINESE HAT: Wet landing onto a rocky-terrain trail. 30 minute hike that’ll take you through lava rock formations, you’ll see the lava cacti and the Galapagos Sesuvium. Snorkeling on the beach before heading back onboard. 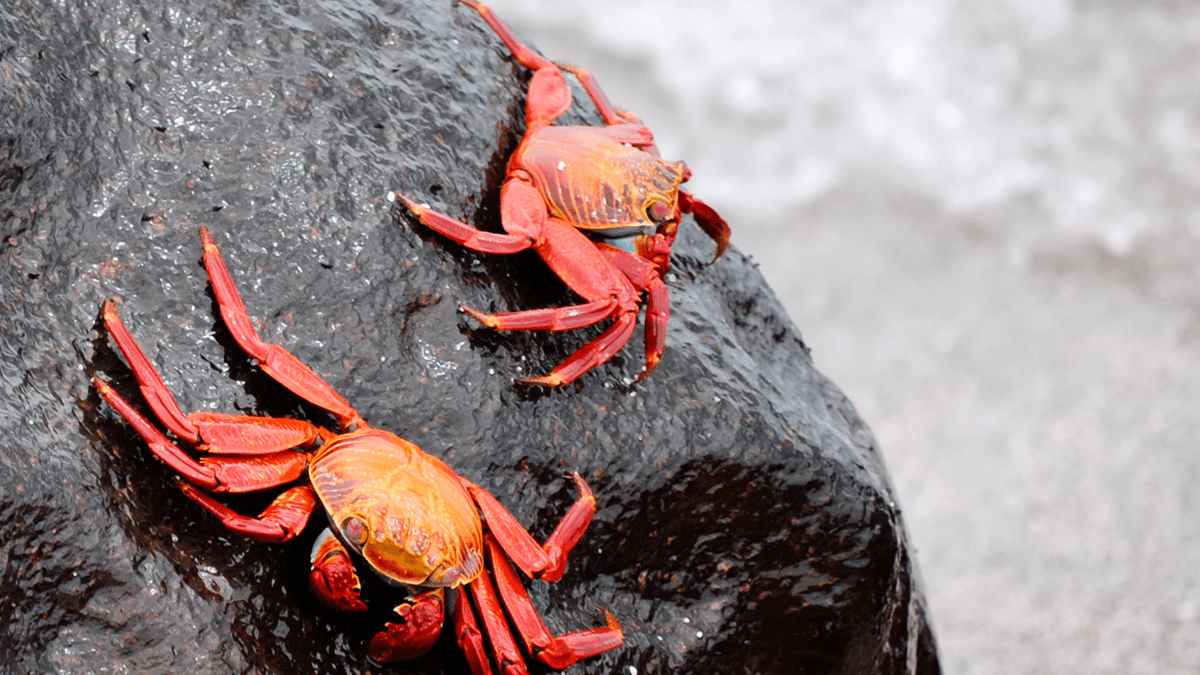 PRIMICIAS RANCH: On the very first stop, you’ll be able to see the staple and namesake of the Islands: the Giant Tortoise, these gentle creatures are easily spotted gracing through the foliage or resting. Harder to spot but equally fascinating, the many birds that reside in the Galapagos are literal descendants of the Andean Plateau species; endemic sub-species of Mockingbirds, Flycatchers, Cattle Egrets and Finches can be seen throughout the Ranch.

TINTORERAS: Located South of Port Villamil, Tintoreras has a tranquil turquoise-water bay where a variety of marine life can be seen: sea turtles, iguanas, and sea lions are almost a guaranteed spot. The bay is connected to a shallow fissure, when the tide is low the entrance is cut off and sharks and stingrays can be found swimming within. Lunch onboard.

ARNALDO TUPIZA BREEDING CENTER: The population of giant tortoises of the island is maintained through their bred-in-captivity program.

WETLANDS: This area is known for its sandy beaches, rocky coastline and its mangroves. A series of trails allow tourists to closely observe the four species of mangrove that can be found in the Galapagos, as well as Great Blue Herons, Galapagos Hawks, Lava Herons, Striated Herons, Lava Gulls and many other bird species. 30 minute hike.

WALL OF TEARS: A solemn reminder. The wall was built between 1946 and 1959, while the island was a penal colony. Inmates were forced to erect the wall with large blocks of volcanic rocks. The wall is called so because of the many inmates that died building it. 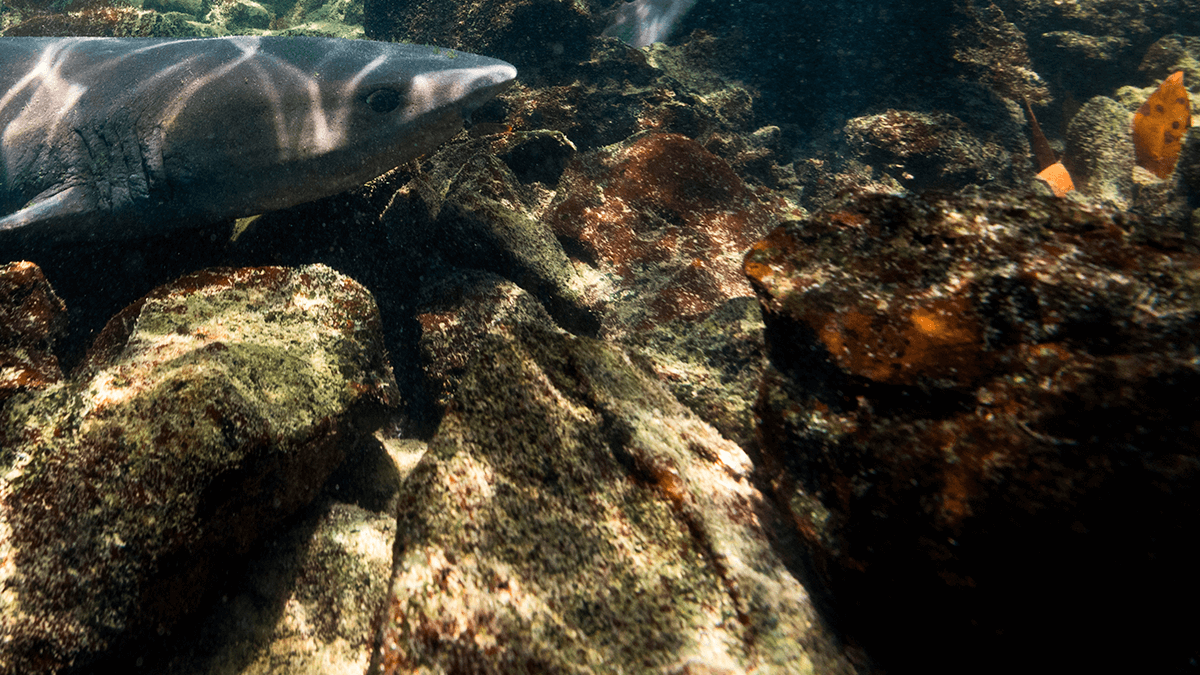 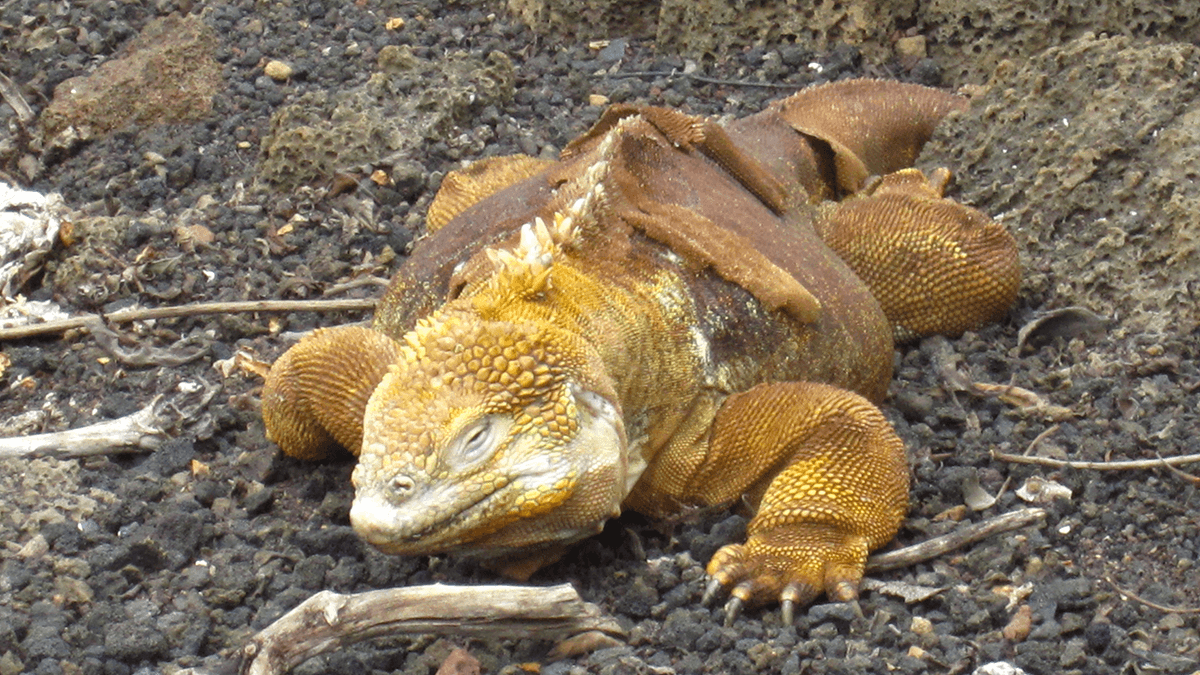 RABIDA ISLAND: One of the more colorful and volcanically active islands of the archipelago, as well as an amazing diving site. We begin at the prominent Brown-Sanded Beach of Rabida, then a light ½ a mile hike to reach a lookout of breath-taking view.

A paradise for birdwatchers, Flycatchers, Brown Pelicans, Galapagos Hawks, varieties of Finches and many other of the rarer species flock to Rabida. Wet landing, lunch onboard.

DRAGON HILL: After docking, we’ll go behind the beach to reach a hyper-saline lagoon frequented by Flamingos, Wilson’s plovers, Black-bellied Ducks among others. The hike to Dragon Hill overviews the bay and takes you right into the Galapagos Land Iguana nesting grounds after which the site takes its name. Many of the iguanas nesting at Dragon Hill have been relocated here by the Charles Darwin Scientific Station.

No landing, dinghy (panga) tour of the site; near Baltra.

An extraordinary beautiful experience. You’ll get a chance to see Black Sea Turtles in the clear water below, as the dinghy cuts the engine and the operators row you along the mangrove-laden shoreline, discover hidden lagoons while keeping an eye out for the diverse bird and sea life variety.

After visiting the cove, you’ll do your final transfer to Baltra Airport by bus and fly back to mainland. 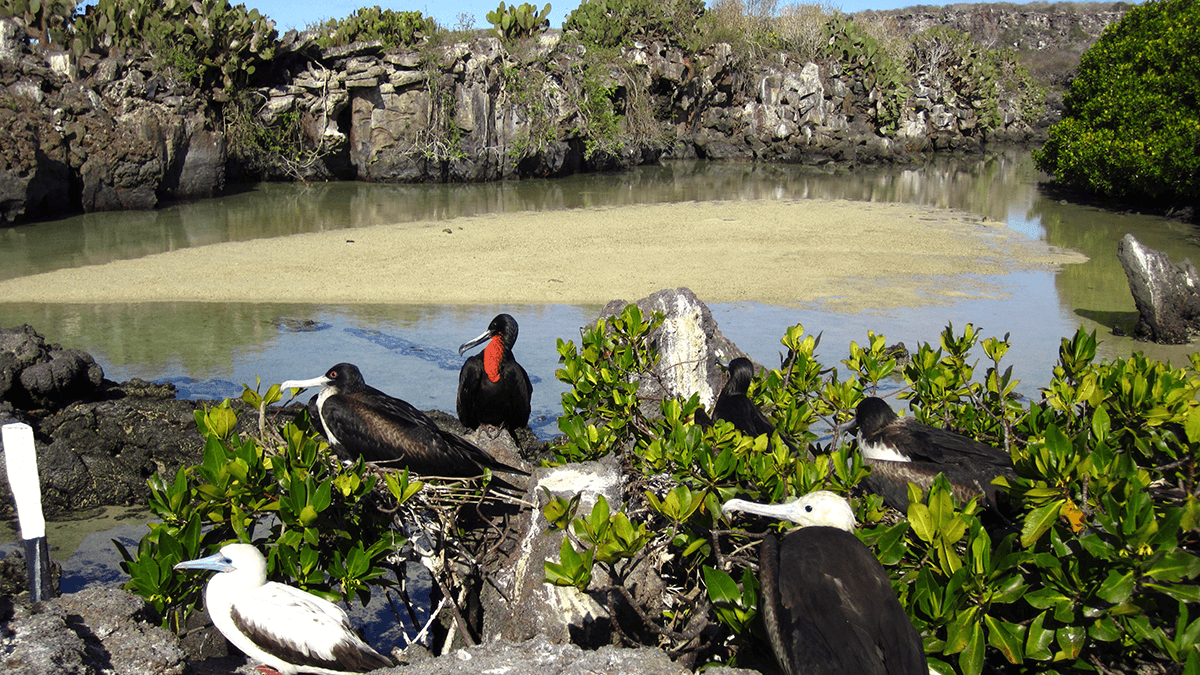 RATES STARTING AT $2416.00 Itinerary may chance due to force majeure